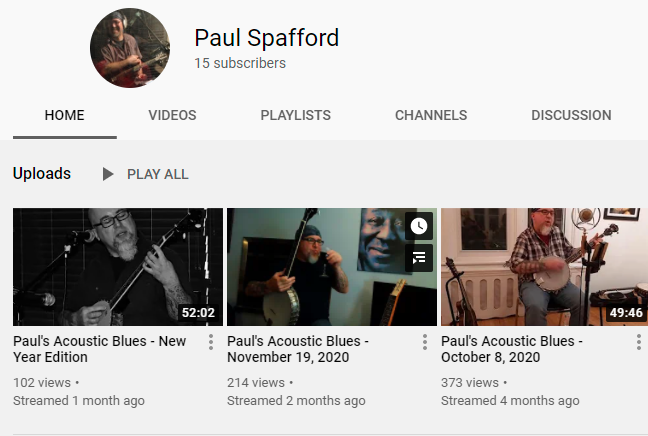 Yeah, dude, I’m still doing lots of live online shows (about one per month), and I’m having fun with it. You can check out all my videos by going to the Video page. Or I suppose you could cut out the middle man and go directly to my YouTube channel.

I’ve figured the tech out a bit better now, and have switched to YouTube as my delivery method. Between using YouTube, and switching out my hardware, the sound and picture seem to be much better on the more recent shows.

Another new feature to the performances: I started out just playing mandolin and tenor banjo. When a song called for it, I also added the five-string banjo, but with the fifth string removed and played with a pick. This is similar to the plectrum banjo that you see some jazz folk playing.

Then a few months ago, I started adding some songs playing slide on my lap-style resonator guitar – some people call it a dobro, but some time I’ll do a little write-up on why that’s inaccurate (because you’re dying to know!). Anyhow, there’s a bit more variety in each show with up to four instruments making an appearance. Maybe I’ll get my tenor guitar in there one of these times too!

I make an effort to learn a few new songs for each show, so don’t assume that there is no need to tune in just because you’ve seen previous shows. Feel free to check it out.

It had been a bit since my last Facebook live show, so July 16 was the fateful date for Show Number 6.

Another attempt at using some of my fancier gear has made me decide that just resigning myself to always using my iPad to record these things wasn’t necessarily a bad idea.

As is the norm, I wasn’t entirely happy with my playing while I was playing, but I felt better about it when I watched the show later. I ended up quite happy with how the (mostly) a capella Son House song went; that’s cool since I was worried about that one.

Here’s a recording of the video if you want to watch it.

I’m only working on a new song or two for the next one, because I really do know a lot of songs, and want to work on technique more. So there may be a few more repeats in the next show, but I guess if I were better at marketing I’d refer to them as “favourites” instead of “repeats”.

Another three weeks since my most recent Facebook live show, June 20 was the fateful date for Show Number 5.

After another attempt to get my expensive mic and okay camera to work with Facebook Live, I used my iPad yet again. I swear, dude, this microphone works fine in GarageBand, but buzzes non-stop in Facebook. More research required.

Here’s a recording of the video if you want to watch it.

Another three weeks since my most recent Facebook live show, so May 20 was the most magical of dates to do Show Number 4.

We had watched another local guy do an hour-long show a few nights ago, and Laura mentioned that his hour never felt like it was too long, so I should consider doing longer than my standard 20-minute show. As a result, this show ended up clocking in at about 48 minutes.

That felt like a pretty big jump at the time (even though I’ve done much longer shows in real life), so I may aim for some middle ground next time. My goal is to end each show before the audience wants me to, instead of waiting for them to call to their deity of choice to end it for them.

Now that I’ve done a few shows, I felt comfortable putting in some repeat songs from previous times. Here’s a recording of the video if you want to watch it.

I’m still working on learning new songs to be able to keep things fairly fresh as we go along with future episodes.

It had been three weeks since my second Facebook live show, which was three weeks after my first, so I guess an arbitrary schedule had been arbitrarily decided upon. ‘Twas time for Show Number 3 on April 29.

Laura corralled the kids to the basement to watch the show on their devices while I was broadcasting from my second-floor office. This will probably sound weird, but the only thing I find more awkward than playing with only my iPad as the live audience, is playing for a live audience consisting only of loved ones. So the criteria has now been set. I either play for mostly strangers, or I play for some equipment. Seems to work so far.

Since I had played my most comfortable songs in the previous two shows, I learned a few new songs for this one, and practiced up some of the songs I’ve historically not been as comfortable with. You know … in an effort to continue developing as a musician and all.

The video is about 30 minutes long, if you want to watch it here.

We may not be done with the social isolation for a bit, so I’m learning some more songs, and working on stuff for the next show.

It had been a while since my first Facebook Live show, and I was starting to go a bit squirrelly without playing in front of folk. Coincidentally, my oldest boy’s girlfriend sent me one of her politely phrased texts: “Stop screwing around and do another live stream” (I may have paraphrased that a bit).

So here I was on a Thursday night at 9pm doing another show from my office. I know I had said I’d get the fancier equipment sorted out for the next show, but my iPad did a decent job last time, so I just went with what works.

I’ve seen a lot of other shows where they put up a clipboard or something that says they’ll be starting in five minutes, while they wait for people to join. That’s all very fine for the live broadcast, but when you’re saving it for afterward, anyone who watches it later is confronted with this unnecessary delay. So, as with my first show, I started exactly one minute early, and then did some instrumental work for a couple minutes, while people tuned in.

The video is about 30 minutes long, if you want to watch it here.

Apparently our neighbour’s kid was proud that I “learned how to turn the webcam off”. I even did it without cussing this time.